The history of the Old Hundred Gold Mine begins in the spring of 1872 when the first of the three Neigold brothers arrived from Germany and staked their claim on the "Number Seven" vein. Reinhard, Gustave, and Otto Neigold spent the next 30 years prospecting and developing the veins on Galena Mountain. They even had their own town called Neigoldstown along the busy Stony Pass trail that led into Silverton. Educated and sophisticated, the Neigolds entertained the frontier mining camp with music, song, operas, and plays during the long winter months.

Gradually a large block of claims was assembled on the rugged side of Galena Mountain containing several good veins. One of the claims located in 1898 was named the "Old Hundred" probably after the popular German hymn, "Old Hundreth." By then, the brothers had formed the Midland Mining Company which had plans to drive a long tunnel at the base of Galena Mountain to tap the rich veins deep inside the mountain. Work was done on several levels and good gold ore was found in the highest vein, the Number Seven, at an elevation of 12,750 feet above sea level. 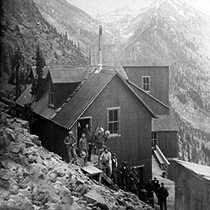 But the Neigolds did not have the large sums of money needed to develop the mine, and they put the property up for sale.

In 1904, the Midland Mining properties were sold to a new company, the Old Hundred Mining Company organized in Maine. The Neigolds now retired from the scene and left Silverton hoping to enjoy their old age on the annual payments due them by the purchasers. The company raised over one million dollars and drove a new No.7 level tunnel at 12,000 feet elevation, still over 2,000 feet above the creek below. The #7 level and two lower levels were connected to the narrow gauge railroad at creek level by an aerial tram, much like a ski lift today. At the mine a large boarding house was built on the side of the cliff for the men to live in. At the bottom massive concrete foundations were poured to build a large stamp mill where the ores were crushed and the gold and other valuable metals separated.

By 1906, gold bars were being shipped to the Denver Mint. The future looked bright and a new "Mill Level" tunnel was started just above the mill, directly into the base of the mountain. But by 1908 the good gold was "mined out" and the financial panic of 1907 dried up sources of new capital for the uncompleted tunnel. The Old Hundred Mining Company never made a profit on the ore it mined, and later defaulted on its debt to the Neigolds who got the now abandoned property back. Broke and broken hearted, the brothers tried to sell the mine but no one wanted a money losing mine. Eventually, it was lost to back taxes and by 1927 the last of the Neigold brothers passed away and their dreams for Galena Mountain seemed gone forever.

During the 1930's, new owners worked the mine sporadically but still unprofitably. However, large tonnages of low grade ore seemed likely to exist in the mountain, and more efficient and cheaper milling methods could hold the answer. What was needed was even more money to finish the long Mill Level Tunnel and a larger modern mill. In 1967 the Dixilyn Corporation, a Texas oil company took a lease on the property. With adequate financing and modern equipment they drove the Mill Level tunnel 5,000 feet into the mountain, an achievement long dreamed about by the Neigolds.

By 1973, after spending over $6,000,000 and driving over 5 miles of tunnel, the disappointing facts could no longer be ignored. The "rich veins" dreamed about by the Neigolds was nothing but a dream. What little ore was found was unprofitable despite better milling and higher gold prices. The mine buildings were torn down, equipment sold, and the mine returned once more to the owners who had bought it in 1934. Nothing was left except for the long abandoned boardinghouse high on the mountainside and miles of empty tunnels.